In 2018, Dedrone installed counter-drone technology at four undisclosed airports across the United Kingdom in order to identify and analyze drone activity. The four airports looked to Dedrone technology to determine if they had any drone incursions at all, and if so, begin deploying a complete counter-drone solution to protect their operations.

Drone activity was monitored at four locations for a total of 148 days, and 285 drones were detected. This report outlines the background of the Dedrone UK Airport Study, the type of technology used, a breakdown of the data collected and the main findings.

Small drones are very difficult to spot by pilots, flight attendants, and air traffic control. While some drone organizations are developing electronic anti-collision technologies that are compatible with airline collision-avoidance systems, the innovations are not being adopted fast enough to resolve the ongoing issue of ensuring safe and clear airspace for passenger aircraft.

Dedrone, the market and technology leader in airspace security, created the UK Airport Counter-Drone Study to provide situational awareness to four international airports and determine the threat level to their operations from unauthorized drones. The Dedrone counter-drone platform combines hardware sensors and machine-learning software, providing early warning, classification of, and mitigation against all drone threats.

In 2018, Dedrone installed drone detection technology at four undisclosed airports across the United Kingdom to identify and analyze drone activity. The four airports looked to Dedrone technology to determine if they had any drone incursions at all, and if so, begin planning a complete counter-drone solution to protect their operations. During a threat analysis, Dedrone deploys a drone detection sensor, which feeds data to DroneTracker, the software platform. DroneTracker auto-generates a report on what was detected.

Four international airports located in the United Kingdom were selected for this study.

Drone activity was monitored at four locations for a total of 148 days. 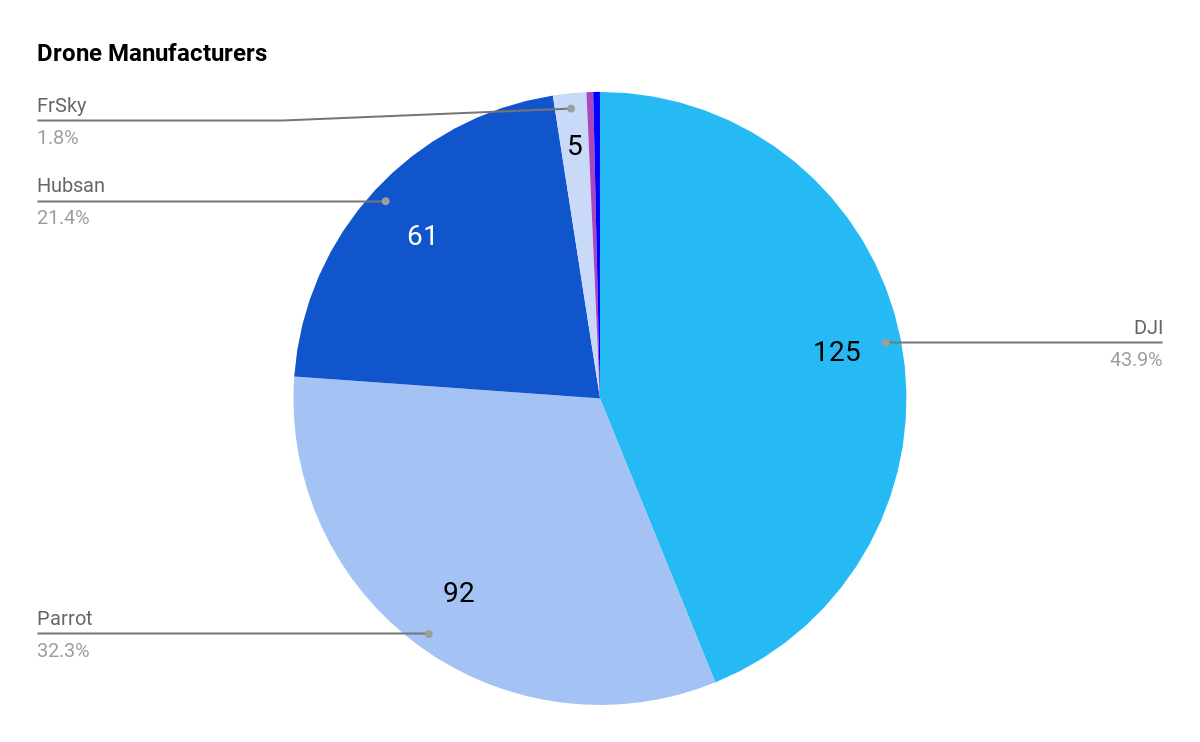 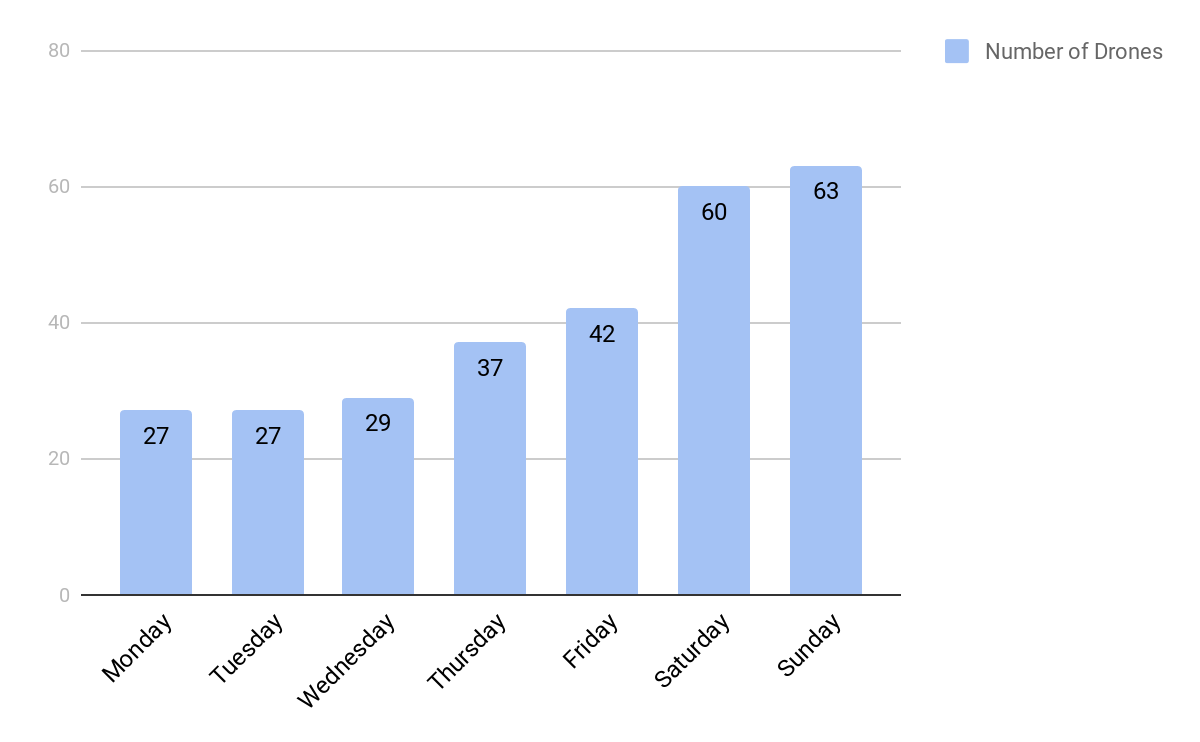 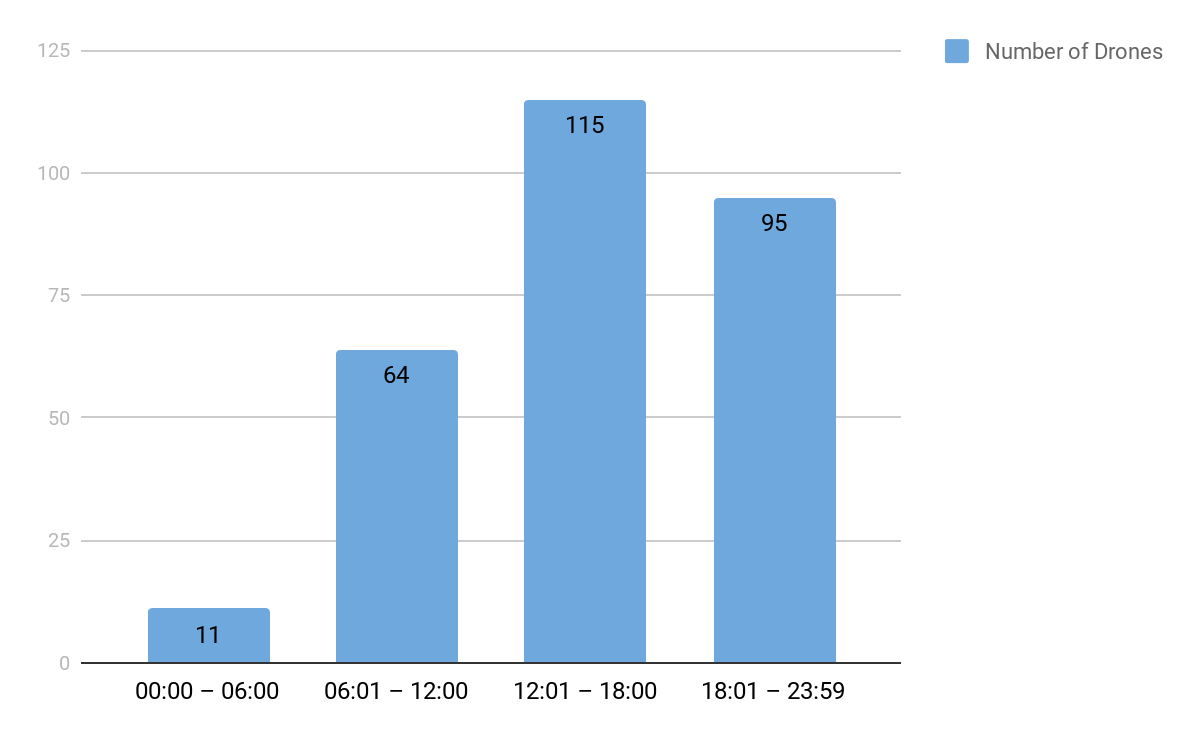 Key Learnings and Next Steps:

The problem of unauthorized drones at airports is real, not anecdotal: Drones have appeared and disrupted UK airports in the past year, causing loss of revenue due to closed runways.Drone pilots fly a broad spectrum of technology from different drone manufacturers, and detection technology must be able to capture all drone activity: Drone detection systems must be able to detect all kinds of drones, regardless of the manufacturer. While DJI is the global market leader in drone technology by sales, they only represented 44% of the incursions at the airports studied.UK drone pilots come out to fly at airports around the same time and days, and airports can strategically prepare for increased incursions during these periods: The majority of the incursions occurred on weekend afternoons when drone hobbyists may be flying drones to capture footage for personal use.

Airports involved with the Dedrone study now have a baseline of data to work with their operation leadership and community liaisons to build awareness campaigns, and also dedicate resources for additional research. The next step in research is to identify additional ways to create situational awareness. Dedrone provides technology such as the RF-300, which maps the flight path of the drone, and DroneTracker can integrate into sensors such as cameras, radar, and microphones, to add additional layers of information about drone incursions. With this data, airports can create operating procedures, such as defining the circumstances to approach pilots, shut down runways, or defend themselves against a drone threat.

In December 2018, Gatwick Airport, Britain’s second busiest airport, was forced to close its only runway due to numerous reports of drones, impacting nearly 140,000 passengers and leading to the deployment of the national guard. Dedrone technology was not in place at Gatwick during the incursion, and Gatwick airport is not a part of this study.

When an unauthorized drone entered Gatwick airport’s airspace in the summer of 2017, air traffic controllers had to redirect incoming planes and keep them flying in holding patterns nearby. If they didn’t have enough fuel, they were re-routed to land at other airports. Planes and passengers on the ground were delayed by two hours. Watch a simulation of this event in action here.

Operation Zenith is the codename for a program of live demonstrations of Air Traffic Management (ATM) and Unmanned Traffic Management (UTM) integration in controlled airspace in the UK. Altitude Angel, the UK National Air Traffic Services, Dedrone, Vodafone and other technology partners are joining to demonstrate how cooperative and uncooperative drone traffic (and potential risks) can be detected and mitigated.

This data provides conclusive evidence of the presence of drones at UK airports. Airport operators must consider how to approach drone safety measures and determine the additional risks that drones pose to their overall security program. Airports are multi-faceted security centers. They have officers monitoring the airfield, tarmac and fences, people on the ground following cargo and passenger baggage, and managers of warehouses that contain fleet maintenance programs. Thousands of safety and security elements exist on a single day in the life of an airport, and each component has a different security risk. Aviation regulators and airports are acutely aware of the dangers drones pose to their airspace. However, there is a gap of knowledge and understanding of the intention of drones within physical grounds of airports. All drones near airports are a threat, regardless of the pilot’s intention. Airport managers must be proactive in protecting their operations from incursions.

International aviation regulators have been slow to provide guidance to airports as to the types of counter-drone technology they are allowed to incorporate into their operations. This lag to adopt drone detection technology at airports will only become increasingly more dangerous as more incidents occur. As seen with the Gatwick Airport shut down, drones are going to cause damage and disrupt operations, leaving passengers frustrated and airlines blocked out of safe and clear airspace to fly.

‍Flights diverted, passengers delayed, and operations stalled when drones enter international airports: Oslo Airport reported that in a single day, two drones were spotted and forced the airport to halt all approaches and departures until the air cleared. One drone pilot was identified to be a local real estate agent who was taking pictures of a nearby property. Auckland Airport also reported downtime of over 30 minutes after spotting a drone, and Ben Gurion Airport in Tel Aviv, delaying all arrivals and departures for 15 minutes.‍

Drone-Linked Aircraft Crash Investigated by Federal Agencies: A student helicopter pilot and instructor struck a tree while trying to evade collision with a small drone. Once the pilot saw the drone, the instructor took the controls, and after maneuvering away from the drone, the copter’s tail hit the tree as they attempted a landing. The U.S. National Transportation Safety Board and FAA are investigating.‍

Drone ‘put 130 lives at risk’ as a plane was trying to land at Gatwick Airport. The plane’s first officer told investigators that the ‘startle factor of the drone’s proximity’ nearly caused him to disconnect the cockpit’s autopilot system and take ‘avoiding action’. Instead, he landed the plane to safety at a nearby airport.

‍Canadian passenger plane collides with rogue drone. “This should not have happened,” shared Canadian Transportation Minister Marc Garneau following the crash. “If a drone were to hit the window of a cockpit and incapacitate the pilot, or were to damage in anyway an engine, this could have catastrophic results.”‍

“It’s unclear how the drone got there.” A crashed drone was found at John F. Kennedy (JFK) airport in New York City during a routine maintenance check. ‍

Flights halted after drone is spotted. A drone camera was being used to prepare a film shoot near Indira Gandhi International Airport in Delhi, India. Three people were arrested in this matter.‍

Drone in near miss with plane near Edinburgh Airport: An unmanned craft was flying about 20-30 metres away from a Loganair flight at about 4,000ft. No-one was injured and the plane successfully landed.

These free tools can strenthen your content for social media

Take Your Videos Farther: How to Create New Content with Existing Videos